Antioxidants and the Free Radical Theory of Aging 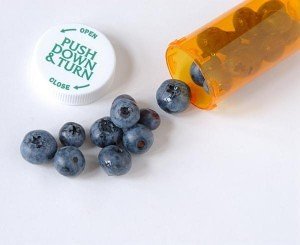 It is the philosophy of this website to be as objective as possible and to not hype any longevity technique, tip or suggestion.  When it comes to free radicals and antioxidants, there is a lot of anecdotal and “common sense” evidence, but empirical evidence is still rather nascent.  The field is complex and fascinating with great potential for longevity.  As explained below, the complexity, in part, stems from the fact that there are multiple types of antioxidants, free radicals, tests and variations in bioavailability.

Free radicals cause damage when they encounter another molecule and seek to find another electron to pair with its unpaired electron.  The free radical often pulls an electron from a neighboring molecule, causing the neighboring molecule to become a free radical itself. The new free radical can then pull an electron off the next molecule causing a chain reaction of radical production to occur.  The free radicals produced in such reactions often terminate by removing an electron from a molecule which becomes changed or cannot function without it.  In biology, these events often cause damage to the molecule, and thus to the cell that contains it because the molecule often becomes dysfunctional.

The chain reaction caused by free radicals can lead to cross-linking of atomic structures. In cases where the free radical-induced chain reaction involves base pair molecules (the building blocks of the DNA double helix) in a strand of DNA, the DNA can become cross-linked.  DNA cross-linking can lead to various effects of aging including the formation of cancer.  Other cross-linking can occur between fat and protein molecules which can lead to wrinkles.  Free radicals can oxidize LDL which is a key event in the formation of plaque in arteries which can lead to heart disease and stroke.  The brain is uniquely vulnerable to oxidative injury because of its high metabolic rate and elevated levels of polyunsaturated lipids, the target of lipid peroxidation.  These are examples of how the free radical theory of aging has been used to postulate the origin of many chronic diseases.

Antioxidants are helpful in reducing and preventing damage from free radical reactions because of their ability to donate electrons which neutralize the radical without forming another.  For example, ascorbic acid (vitamin C), can lose an electron to a free radical and remain stable itself.

The measurement of antioxidants is not a straightforward or standardized process because of the many different types of food-based antioxidants and their various reactions to different reactive oxygen species.  In food science, the oxygen radical absorbance capacity (ORAC) used to be the industry standard for measuring the antioxidant strength of whole foods, juices and food additives.  However, the United States Department of Agriculture (USDA) withdrew these ratings in 2012 because, “the associated metabolic pathways are not completely understood”.  The USDA further stated that ORAC values were routinely being misused by food and dietary supplement manufacturers to promote their products and by consumers to guide their food and dietary supplement choices.

There are over 50 different methods used to measure antioxidants.  An international gathering of researchers from 19 countries in 2004 failed to reach a standard and the effort continues.  To give you an idea, here are some of the common antioxidant measurements techniques.

Adding complexity to the analysis is the fact that there are multiple classes of free radicals that cause damage to the body. ORAC only tests for a type called peroxyl radicals.  The hydroxyl free radical is very reactive and can damage carbohydrates, nucleic acids, lipids, and amino acids.  It is created in the skin by exposure to ultraviolet rays from the sun.  The peroxynitrite free radical is very damaging to proteins.  It has been shown to degrade collagen protein which is a major protein found throughout the body.  Superoxide anion is an extremely reactive free radical that damages fatty acids and DNA.  Lastly, the singlet oxygen free radical has been shown to oxidize LDL cholesterol and is therefore a factor in the development of cardiovascular disease.

Some labs are now using tests to identify antioxidant activity for all five of the classes of free radicals listed above.  This enables them to identify a wider spectrum of antioxidant activity associated with specific substances that in the past were measured only for their peroxyl neutralizing ability.  This broader assessment of antioxidant capacity is called Total ORAC.  Total ORAC is broken down into tests such as ORAC for peroxyls, HORAC for hydroxyls, NORAC for peroxynitrites, SORAC for superoxide anion and SOAC for singlet oxygen.

Tip: There are many different types of food-based antioxidants in the form of enzymes, vitamins, minerals and other nutrients.

As discussed, there are many variables and there is no definitive resource for antioxidants, but here is a guideline of top sources per main category.

There are some published lists that can give you a general sense of how different foods compare.  In 2004, the U.S. Department of Agriculture (USDA) originally published a list of ORAC values for common foods.  It was updated in 2010.  In 2010, the Nutrition Journal developed a comprehensive food database consisting of the total antioxidant content of typical foods using a modified version of the FRAP assay.

USDA chemist Ronald Prior says the total antioxidant capacity of the foods does not necessarily reflect their health benefit. Benefits depend on how the food’s antioxidants are absorbed and utilized in the body, otherwise known as bioavailability.  Antioxidant bioavailability varies depending on things like food preparation and processing, nutrient combinations ingested and differences in individual human bodies.